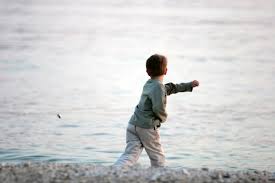 As a man walked a desolate beach one cold, gray morning he began to see another figure, far in the distance. Slowly the two approached each other, and he could make out a local native who kept leaning down, picking something up and throwing it out into the water. Time and again he hurled things into the ocean.

As the distance between them continued to narrow, the man could
see that the native was picking up starfish that had been washed upon the beach and, one at a time, was throwing them back into the water.

Puzzled, the man approached the native and asked what he was doing. “I’m throwing these starfish back into the ocean. You see, it’s low tide right now and all of these starfish have been washed up onto the shore. If I don’t throw them back into the sea, they’ll die up here from lack of oxygen.”

“But there must be thousands of starfish on this beach,” the man replied. “You can’t possibly get to all of them. There are just too many. And this same thing is probably happening on hundreds of beaches all up and down this coast. Can’t you see that you can’t possibly make a difference?”

The local native smiled, bent down and picked up another starfish, and as he threw it back into the sea he replied, “It just made a difference to that one!”

4 thoughts on “Chicken soup for soul: It just made a difference to that one…..”