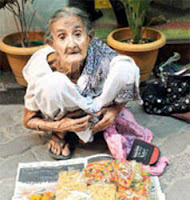 In the image above is Shila Ghosh, an 83-year-old woman who lives in Bally in West Bengal, a state in the eastern region of India and is the nation’s fourth-most populous.

Her only son had heart ailment and passed away a few months ago. To make ends meet, Shila now works. Every evening, Shila comes from Bally to Kolkata to sell chips.

When asked if she has a problem in traveling, she weakly smiled and said: “No, the bus gets me here and my health is not that bad.”

Circumstances could have easily forced her to beg but her dignity and respect is everything for her, she is determined to work until the end of her life rather than to beg on the streets.

When we go on complaining, let us remember her….. she chose to solve her problems on her own for as they say God helps them those who help themselves.

Don’t worry, Shila is being helped. Although she refuses donations and prefers to make her own living, many people found ways to help without making her feel dependent on anyone i.e. purchase more chips from her… some are also helping her to build a kiosk.