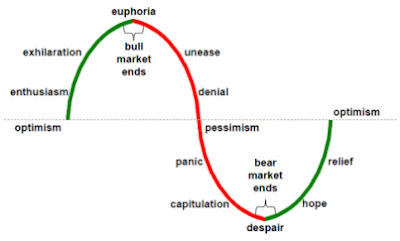 There is reason why an investor should never sell out of an outstanding situation because of the possibility that an ordinary bear market may be about to occur.

If the company is really a right one, the next bull market should see the stock making a new peak well above those so far attained. How is the investor to know when to buy back? Theoretically it should be after the coming decline.

However, this presupposes that the investor will know when the decline will end. I have seen many investors dispose of a holding that was to show stupendous gain in the years ahead because of this fear of a coming bear market. Frequently the bear market never came and the stock went right on up.
When a bear market has come, I have not seen one time in ten when the investor actually got back into the same shares before they had gone up above his selling price. Usually he either waited for them to go far lower than they actually dropped, or, when they were way down, fear of something else happening still prevented their reinstatement.

This brings us to another line of reasoning so often used to cause well- intentioned but unsophisticated investors to miss huge future profits. This is the argument that an outstanding stock has become overpriced and therefore should be sold. What is more logical than this? If a stock is overpriced, why not sell it rather than keep it?

Under these circumstances, how can anyone say with even moderate precision just what is overpriced for an outstanding company with an unusually rapid growth rate? Suppose that instead of selling at fifteen times earnings, as usually happens, the stock is now at twenty five times earnings. Perhaps there are new products in the immediate future, the real economic importance of which the financial community has not yet grasped. Perhaps there are not any such products. If the growth rate is so good that in another ten years the company might well have quadrupled, is it really of such great concern whether at the moment the stock might or might not be 25 per cent overpriced? That which really matters is not to disturb a position that is going to be worth a great deal more later.

See what Phil Fisher says from “Common Stocks and Uncommon Profits” :
“A word of caution may not be amiss, however, in regard to too readily selling a common stock in the hope of switching these funds into a still better one. There is always the risk that some major element in the picture has been misjudged. If this happens, the investment probably will not turn out nearly as well as anticipated. In contrast, an alert investor who has held a good stock for some time usually gets to know its less desirable as well as its more desirable characteristics. Therefore, before selling a rather satisfactory holding in order to get a still better one, there is need of the greatest care in trying to appraise accurately all elements of the situation.
At this point the critical reader has probably discerned a basic investment principle which by and large seems only to be understood by a small minority of successful investors. This is that once a stock has been properly selected and has borne the test of time, it is only occasionally that there is any reason for selling it at all. However, recommendations and comments continue to pour out of the financial community giving other types of reasons for selling outstanding common stocks.”
This is the key reason why I am still not selling my cash cow (Indiabulls housing finance) which has already turned 7 bagger for me…