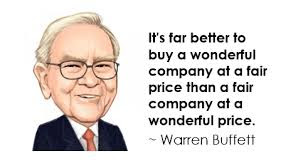 An excerpt from the 1989 Berkshire letter ,The wisdom from Mr. Buffett:

“If you buy a stock at a sufficiently low price, there will usually be some hiccup in the fortunes of the business that gives you a chance to unload at a decent profit, even though the long-term performance of the business may be terrible. I call this the “cigar butt” approach to investing.
A cigar butt found on the street that has only one puff left in it may not offer much of a smoke, but the “bargain purchase”will make that puff all profit.Unless you are a liquidator, that kind of approach to buying businesses is foolish. First, the original “bargain” price probably will not turn out to be such a steal after all. In a difficult business, no sooner is one problem solved than another surfaces—never is there just one cockroach in the kitchen. Second, any initial advantage you secure will be quickly eroded by the low return that the business earns. For example, if you buy a business for $8 million that can be sold or liquidated for $10 million and promptly take either course, you can realize a high return. But the investment will disappoint if the business is sold for $10 million in ten years and in the interim has annually earned and distributed only a few percent on cost. Time is the friend of the wonderful business, the enemy of the mediocre.
You might think this principle is obvious, but I had to learn it the hard way—in fact, I had to learn it several times over. Shortly after purchasing Berkshire, I acquired a Baltimore department store, Hochschild Kohn, buying through a company called Diversified Retailing that later merged with Berkshire. I bought at a substantial discount from book value, the people were first-class, and the deal included some extras—unrecorded real estate values and a significant LIFO inventory cushion. How could I miss? So-o-o—three years later I was lucky to sell the business for about what I had paid. After ending our corporate marriage to Hochschild Kohn, I had memories like those of the husband in the country song, “My Wife Ran Away With My Best Friend and I Still Miss Him a Lot.”

I could give you other personal examples of “bargain-purchase” folly but I’m sure you get the picture: It’s far better to buy a wonderful company at a fair price than a fair company at a wonderful price. Charlie understood this early; I was a slow learner. But now, when buying companies or common stocks, we look for first-class businesses accompanied by first-class managements.”