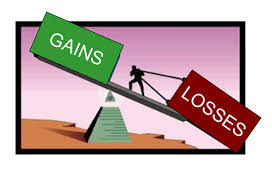 Here’s an example of a bias called as ‘Loss aversion bias’
See below example:

Most people when given these choices, pick B because they think of themselves as conservative and after all a bird in hand is worth two in the bush, right? So why gamble? But, now see what happens when the same people are asked to choose between

Almost everyone now switches from the sure thing to the gamble because they hate taking losses. Notice what just happened here. Just by changing a few words, you can turn people from conservative to gamblers. It turns out, that the quantity of a man’s pleasure from a $100 gain does not exactly match the quantity of the misery from a $100 loss as the chart below shows. 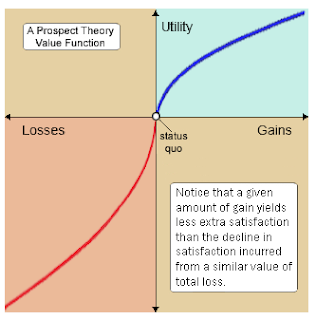 Losses loom larger than gains and most people go to extremes to avoid them.

Loss aversion results in dumb behavior like averaging down when the most sensible thing to do is to take a loss and live to fight another day. It makes us hold on to things, long after they have become toxic, because we hate losing them.

Loss aversion also explains one of the most common investing mistakes: investors evaluating their stock portfolio are most likely to sell stocks that have increased in value or, have gone down the least amount.

Why? Because it hurts to take a loss. Unfortunately, this means that people end up holding on to their depreciating stocks. Over the long term, this strategy is exceedingly foolish, since it ultimately leads to a portfolio composed entirely of shares that are losing money.

Even professional money managers are vulnerable to this bias, and tend to hold losing stocks twice as long as winning stocks. Because selling shares that have decreased in value makes the loss tangible – and losing sucks – We try to postpone the pain for as long as possible. The end result is more losses.

There is an old trading adage that investors ‘should run their profits and cut their losses’, often however investors tend to do the opposite, they act in a way that is psychologically comforting to them, but is actually detrimental to their performance.

Awareness of our tendency towards ‘Loss Aversion’ is a starting point, though on its own awareness is not going to help overcome the tendency. Investors have to ensure that their strategy and approach to investing is correct and able to offset this as well as many other all destructive biases.

‘Some stocks go up 20-30 percent and they get rid of it and they hold onto the dogs.
It’s sort of like watering the weeds and cutting out the flowers. You want to let the winners run.’﻿

People say “When it (stock) rebounds to my cost, I’ll sell.”
Peter lynch  “Come on,The stock does not know you own it! Don’t take it so personally” 🙂