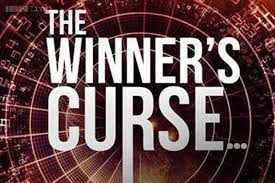 The winner’s curse is a phenomenon that may occur in common value auctions with incomplete information. In short, the winner’s curse says that in such an auction, the winner will tend to overpay.
The winner may overpay or be “cursed” in one of two ways:
1) the winning bid exceeds the value of the auctioned asset such that the winner is worse off in absolute terms; or 2) the value of the asset is less than the bidder anticipated, so the bidder may still have a net gain but will be worse off than anticipated.
However, an actual over payment will generally occur only if the winner fails to account for the winner’s curse when bidding (an outcome that, according to the revenue equivalence theorem, need never occur).

In a common value auction, the auctioned item is of roughly equal value to all bidders, but the bidders don’t know the item’s market value when they bid. Each player independently estimates the value of the item before bidding.

Since most auctions involve at least some amount of common value, and some degree of uncertainty about that common value, the winner’s curse is an important phenomenon.

So if, for example, an oil field had an actual intrinsic value of $10 million, oil companies might guess its value to be anywhere from $5 million to $20 million. The company who wrongly estimated at $20 million and placed a bid at that level would win the auction, and later find that it was not worth as much.

Other auctions where the winner’s curse is significant: The Winner’s curse suggests that the winner of an auction often turns out to be the loser. Industry analysts have noted that companies that regularly emerged as winning bidders from these oilfields auctions systematically paid too much, and years later went under. This is understandable…The highest bid at an auction is often much too high – unless these bidders have critical information other aren’t privy to.

So why do we fall victim to the winner’s curse? First, the real value of many things is uncertain. Additionally, the more interested parties, the greater the likelihood of an overly enthusiastic bid. Second, we want to outdo competitors.

According to great Charlie Munger, open-outcry auctions are a perfect set up for driving people to highly irrational behavior. Auction is a place where multiple psychological biases act together, creating a lollapalooza effect, and results in a series of bad decisions.