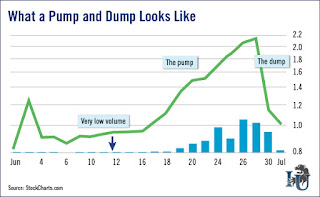 Pump and dump is a form of stock fraud that involves artificially inflating the price (PUMP) of an owned stock through false and misleading positive statements, in order to sell the cheaply purchased stock at a higher price. Once the operators of the scheme sell their overvalued shares (DUMP), the price falls and investors lose their money.

The stock is usually promoted as a “hot tip” or “the next big thing” with details of an upcoming news announcement that will “send the stock through the roof”. The details of each individual pump and dump scam tend to be different but the scheme always boils down to a basic principal: shifting supply and demand. Pump and dump scams tend to only work on small and micro-cap stocks that are traded over the counter. These companies tend to be highly illiquid and can have sharp price movements when volume increases. The group behind the scam increase the demand and trading volume in the stock and this new inflow of investors leads to a sharp rise in its price. Once the price rise has formulated, the group will sell their position to make a large short-term gain.

Pump and Dump schemes may start anywhere on the internet. For instance, it may take place using an e-mail spam campaign through several media channels via fake press release or probably through telemarketing. In such cases of Pump and Dump scheme, the stock broker/analyst often claims to have the “inside news”. Newsletters also claim to have the unbiased recommendations and so does the stock messages.

When a operator’s campaign to “pump” a stock is successful, it will attract potential investors to purchase the shares of the target company. The increased demand on that particular share and of course the trading volume will convince more number of people to believe the hype and eventually to buy shares.

A modern spin on this “Pump and Dump” scheme is known as “Hack”. This could be defined where a person purchases penny stock in advance and then uses compromised brokerage accounts in order to purchase even more quantities of that stock. The end result of such case is the price increase that is pushed further by day traders when a quick advance is noticed in the stock. The stock holder then sells off his stock at a premium price.

While talking about “Pump and Dump”, the point that deserves attention, is the “short and distort”, the variant of the pump and dump scam. In this process, instead of first buying the stock and then artificially raising the price of the same, the scammer first short-sells the stock, then artificially lowers the price using the aforementioned techniques. The scammer covers his short position eventually when he buys back the stock at a lower value.

The traditional means of distributing penny stocks was of floating rumours, broker, analysts networks etc..But now a days, it has been replaced by a new system – E mails, SMS, high profile investor entry !!

For example, People get such messages .. See an example below: 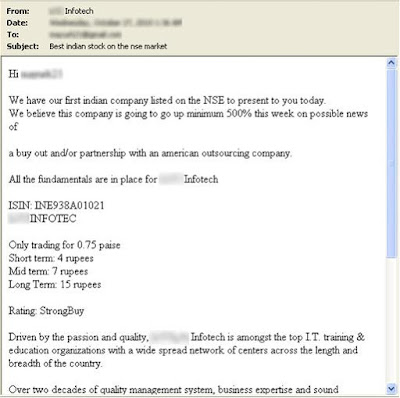 This is definitely an attempt to influence the stock price of a publicly traded company. These exaggerated profits with little investment shown in the spam message may tempt users, to use the opportunity to earn quick bucks. However, users need to understand that such promotions are meant to artificially increase the stock price, albeit temporarily. During this time, operators of the spam drive sell off their stocks, leaving the investors at loss.

The new technology has simplified the whole operation for distribution which may also be in collusion the with the company promoters.
Modus Operandi :
1) Get database of mobile nos from Depositories /brokerage houses or from providers of the same.Mind you sms reaches only people related to stock markets. 🙂
2) Take bulk SMS package from a vendor. The sender remains anonymous as the receiving party just receives a crap 8-9 digit name !!!
3) Send a message giving big targets tempting the gullible small investor to jump into the so called insider news !!!
Although this may not fool the common sense investor but it still sees lot many novices being fooled into the game of temptation.
Two factors work most in such cases:

1) The greed of making quick money.

2) The fear of not being left behind.

It’s this that drives us to do stuff that defies rational logic. No one wants to invest on the basis of an SMS, e- mails and the hindsight will embarrass anyone. However, in the heat of the moment, the fact that an SMS was right the last three times when you didn’t buy, the fact that other people seem to be making money while you sit on the sidelines….that drives people to do such stupidity.

High profile investors’ entry attract number of other savvy investors and hordes of novice investors who dive into the stock without a second’s thought. There are many cases known to us ….

These people take advantage of the excitement that the bulk deal purchase generates amongst retail investors. In the wake of the news of high profile investor’s entry, investors throng the counter and send the micro-cap stock rocketing to the upper circuit for a couple of days. They may be taking advantage of the higher prices to gently offload his holding and pocket a tidy profit.

There is nothing wrong in this modus operandi if it is indeed being followed by them. They normally do not recommend these scrips to anyone to buy the stock nor they give any assurance that they will hold the stock for any period of time. It is perfectly legitimate for them to buy the stock in a bulk deal on day one and sell it quietly on day two in a regular sale.
In fact, this modus operandi (if being followed) is a highly profitable way to leverage the huge popularity that these people enjoys amongst the masses.

The problem is that novice investors associate these high profile peoples’ purchase as the discovery of a stock with great fundamentals and cheap valuations. They buy the stock for the long-term and may get saddled with a junk stock once the excitement peters out.

In context of Indian stock market there are many pump and dump cases…RS software, Kitex Garments, Palred tech …So on and so forth…. I have covered such stories on different site articles already…As investors you need to do you own due diligence before investing. Finally, its your hard earned money, profit is yours and so is the LOSS !