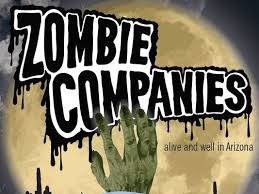 A zombie company is simply a company that is neither dead or alive. In other words it is in so much debt that any cash generated is being used to pay off the interest on the debt or not actually reducing it, they have cut back as much as they can. This means that there is no spare
cash or capacity for the company to invest or grow. This means that is unable to employ more staff but on the flip side as long as the company is not actually losing money on an operational basis it does not need to make further redundancies either.Many economists are arguing that the presence of some estimated 150,000 of these companies are taking market share and locking up talent that should be available to more dynamic and less indebted firms.The statistics are pointing towards this “zombie phenomenon”. Insolvency statistics were showing a much lower than expected failure rate a year ago compared to the last recession, unemployment is lower than expected but productivity is also low. The growth in the economy is recovering, however if interest rates rise, SMEs may struggle.
How come there are so many of these firms?
There are 2 obvious reasons.
Interest rates
Interest rates have been very low for some time now so if you are in debt then interest rate payments are pretty low as well. What is more, interest rates have remained stable. This has given the impression that there is no crunch round the corner and has allowed companies to extend and pretend.
Banks
New liquidity rules and the presence of the Special Liquidity Scheme, and other lending initiatives, means that banks are reluctant to call in loans. What is more asset values are depressed and there are not many buyers out there so some banks will wait before calling in administrators in the hope that any recovery will be better in the future.


What are the risks?

Any sudden change in the business or economic environment could be the catalyst for change. An increase in interest rates is being touted as the likeliest “zombie killer” but a change in the banks or Government’s attitude to these companies could be equally dangerous. A strong improvement in the economy could also be their death knell as quicker and more nimble companies will take advantage of the new opportunities presented leaving the zombies behind.

The main thing about interest rates is that it will affect thousands of people on mortgages as well which will depress demand for companies goods and services so “zombies” will be hit by a double whammy!