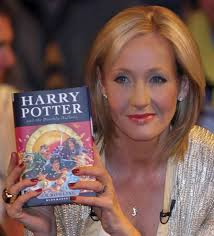 Hear what JK Rowling want to say about failures: how she dealt with them in her own journey from living the life of a young divorced mother near poverty to becoming the creator of a series of books that have sold more than 400 million c
opies, earned her over a billion dollars and created the opportunity for her to do what she’s here to do…

“…why do I talk about the benefits of failure? Simply because failure meant a stripping away of the inessential. I stopped pretending to myself that I was anything other than what I was, and began to direct all my energy into finishing the only work that mattered to me. Had I really succeeded at anything else, I might never have found the determination to succeed in the one arena I believed I truly belonged. I was set free, because my greatest fear had been realized, and I was still alive, and I still had a daughter whom I adored, and I had an old typewriter and a big idea. And so rock bottom became the solid foundation on which I rebuilt my life.

You might never fail on the scale I did, but some failure in life is inevitable. It is impossible to live without failing at something, unless you live so cautiously that you might as well not have lived at all – in which case, you fail by default.
Failure gave me an inner security that I had never attained by passing examinations. Failure taught me things about myself that I could have learned no other way. I discovered that I had a strong will, and more discipline than I had suspected; I also found out that I had friends whose value was truly above the price of rubies.

The knowledge that you have emerged wiser and stronger from setbacks means that you are, ever after, secure in your ability to survive. You will never truly know yourself, or the strength of your relationships, until both have been tested by adversity. Such knowledge is a true gift, for all that it is painfully won, and it has been worth more than any qualification I ever earned…“

Sometimes they laugh sometimes cry. But they keep trying and trying…laughing and crying.

Unlike us adults, our babies don’t know the possibility of a failure, so they happily keep falling down until one day they take a few steps, and then a few more. Before long, they’re jumping and running. All their trying pays off.

They fall but never fail.

As an investor, what is in it for us? We see market moving up and down….When it moves up we are happy and try to reach euphoria…When it moves down, we become tense and then (unknowingly) hit panic trigger buttons.

if you can shrug off a loss from a stock, tell yourself, “Well, let me take the lessons from this mistake (if it was a mistake) and work better to find another opportunity,” and simply let it go – instead of saying, “Oh, investing is not my cup of tea, so let me avoid it!”?