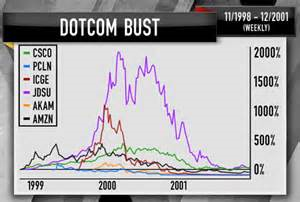 Warren Buffett wrote this in his 2000 letter to shareholders…

The line separating investment and speculation, which is never bright and cle
ar, becomes blurred still further when most market participants have recently enjoyed triumphs. Nothing sedates rationality like large doses of effortless money. After a heady experience
of that kind, normally sensible people drift into behavior akin to that of Cinderella at the ball. They know that overstaying the festivities—that is, continuing to speculate in companies that have gigantic valuations relative to the cash they are likely to generate in the future—will eventually bring on pumpkins and mice. But they nevertheless hate to miss a single minute of what is one helluva party. Therefore, the giddy participants all plan to leave just seconds before midnight. There’s a problem, though: They are dancing in a room in which the clocks have no hands.

Buffett was talking about the irrationality he was seeing around during the heydays of the dotcom boom. What followed next i.e., the bust, is deeply etched in most investors’ memories who participated in that irrationality.