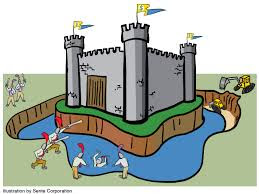 The idea of an economic moat refers to how likely a company is to keep competitors at bay for an extended period. One of the keys to finding superior long-term investments is buying companies that will be able to stay one step ahead of their competitors, and it’s this characteristic..think of it as the strength and sustainability of a firm’s competitive advantage.Companies that
have generated returns on capital higher than their cost of capital for many years running usually have a moat, especially if their returns on capital have been rising or are fairly stable. Of course, the past is a highly imperfect predictor of the future, so we look carefully at the source of a company’s excess economic profits before assigning a moat rating.For example, a competitive advantage created by a hot new technology usually isn’t very sustainable, because it won’t be too long until someone comes along and invents a better widget.

Here are some of the attributes that can give companies economic moats:

Network Effect: The network effect occurs when the value of a company’s service increases for both new and existing users as more people use the service. For example, millions of buyers and sellers on flipkart.Flipkart give the company an advantage over other online marketplaces. The more sellers there are on Flipkart, the more likely buyers are to find what they’re looking for at a decent price. The more buyers there are, the easier it is to sell things.

Intangible Assets: Patents, brands, regulatory licenses, and other intangible assets can prevent competitors from duplicating a company’s products, or allow the company to charge a significant price premium. For example, patents protect the excess returns of pharmaceutical manufacturers such as Wockhardt. When patents expire, generic competition can quickly push the prices of drugs down 80% or more.

Cost Advantage: Firms with a structural cost advantage can either undercut competitors on price while earning similar margins, or they can charge market-level prices while earning relatively high margins. For example, generic drug manufacturers.
Switching Costs: When it would be too expensive or troublesome to stop using a company’s products, the company often has pricing power. Architects, engineers, and designers spend entire careers mastering software languages’ packages, creating very high switching costs.

Efficient Scale: When a niche market is effectively served by one or a small handful of companies, efficient scale may be present. For example, energy companies such as Reliance, TATA power enjoy a natural geographic monopoly. It would be too expensive to build a second set of electricity connections to serve the same routes; if a competitor tried this, it would cause returns for all participants to fall well below the cost of capital.